Overview and a Message to Teachers:

Prisoners of a Nazi death camp, 1945
This lesson is designed as a way of teaching about the importance of Justice Robert H. Jackson  the 1945 trials of the Nazi leaders at Nuremberg, as well as  the 1998 establishment of the International Criminal Court.  Given the pressures on today's educators, you'll be pleased to see that no additional work or research is required to implement the lesson--other than following the steps below.  It is assumed that your students have a basic understanding of the people, places, and history associated with with World War Two and the Holocaust. While it can be used for any secondary school audience, we have included additional materials for AP students as well.

Step #1: Setting the stage with an Introdution (5 minutes)

Justice Robert H. Jackson
Before the main part of this lesson begins, if you haven't done so already, provide a brief biography of Jackson's life using images from the power point; or, from the Jackson Center website. It is important that you are efficient with your time, involving the students as soon as possible with the play below. End by saying that the goal of the class is to understand the importance of what Jackson did at Nuremberg--and how this contribution led to the creation of the International Criminal Court. 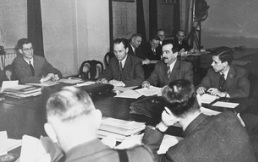 The 1945 London Conference
After accepting the post of chief prosecutor of the Nazi leaders, Jackson flew to London where he would meet to plan the trials with representatives from the other winning countries in World War Two--Britain, France, and the Soviet Union. Their meeting became known as the London Conference. And while the words "Holocaust" and "Genocide" weren't yet in the world's vocabulary, the Conference in London set the course for what should be done with the Nazi leaders who committed these crimes--and is where our play begins. Click here for the handouts of the play for your students to use, choose the roles, and begin. After, you may want to show them the original 1945 Newsreel that shows part of his famous opening statement.

Step #3: From Nuremberg to the International Criminal Court, A Video History (5 minutes) 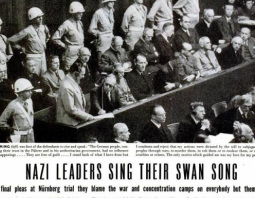 Since Jackson’s death, the Nuremberg principles of fairness and rule of law have affected millions of people around the world. Now, no ruthless dictator can claim that they didn’t know what they were doing was wrong. In order to extend what happened at Nuremberg to the world today, on July 17th, 1998 the International Criminal Court-- or I.C.C. -- was created. Jackson hoped that the existence of such a court on a permanent basis would prevent war and atrocities, standing as a constant reminder to war criminals that they could face serious charges for their actions, and not have impunity. After completing the play on the London Conference, play your students the short video that explains what happened after Nuremberg, leading to the creation of the International Criminal Court at the Hague, Netherlands.

ICC Chief Prosecutor Fatou Bensouda
The International Criminal Court  is headed by its Chief Prosecutor Fatou Bensouda. Since its beginning in 1998, it has publicly charged--or indicted--over 30 of the world’s worst war criminals.The following activity will ask you follow the footsteps of Jackson and Bensouda by becoming an international prosecutor, looking at some of the world's most wanted war criminals by the I.C.C. today. Have your students examine the Common Core evidence, discuss the charges, and debate which alleged criminal they would indict first. Ask them what approach Jackson might recommend.

For homework, or a second day of class, we recommend that you assign any one of the following Common-Core reading and writing exercises: 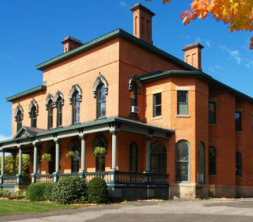 This lesson was created by the Education Staff of the Robert H. Jackson Center, all rights reserved.
Any feedback or constructive criticism is welcome by emailing Education Directors Joe Karb or Drew Beiter